Workers World Party: Who We Are

Workers World Party is a revolutionary Marxist-Leninist party dedicated to organizing and fighting for a socialist revolution in the United States and around the world. With branches around the U.S., WWP develops militant organizers in every struggle, from anti-racist and immigrant rights to labor, anti-war and anti-imperialist struggles. 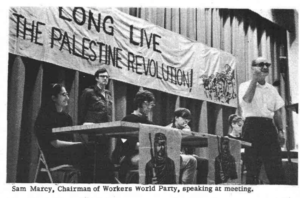 We are active in the Black Lives Matter movement including advocating for disarming the police and other repressive state apparatus. Workers World Party supports the lesbian, gay, bisexual, transgender and queer struggles, and the fight for the rights of people with disabilities and women. We are in solidarity with the struggle for a living income, including the massive fight for a $15 hourly wage, as well as free healthcare for all and reproductive justice. We oppose the ruling class agenda of austerity and their attacks on the living standards of all workers. We fight against home foreclosures and evictions, water and utility shutoffs, school closings and charter schools. We support unions in the fight against the bosses. We call for the end to the rule of Wall Street, the military and the corporations as a necessary step in the struggle to mitigate climate change and to stop further harm to the environment.

We oppose U.S. intervention everywhere – in the Middle East, Latin America, Caribbean, Africa, Asia, Europe, and Indigenous lands within the United States. We unconditionally support the Palestinian people in the struggle against the Zionist state of Israel. We call for the shutdown of the Pentagon and the use of the war budget to improve the lives of the working class and especially the oppressed peoples. We fight for the right of self-determination including the right to separation for all oppressed nations at home and abroad.

In the early 1960s our youth arm, Youth Against War & Fascism, made neo-Nazis, Ku Kluxers and other racists retreat. We were at the

historic “Days of Rage” in Chicago with the Students for a Democratic Society and the Weatherpeople. We helped organize to free Angela Davis. YAWF Women revived the socialist tradition of International Women’s Day in 1970. Since before the heroic Stonewall Rebellion of 1969, Workers World Party has been defending the rights of lesbian, gay, bi, trans and queer people against patriarchy and oppression.

In the early 1960s we defended the right of oppressed people like African-American, revolutionary, Robert F. Williams, to arm themselves against racists and the police in the South. We were among the biggest supporters of the Black Panther Party and organized countless marches in support of this revolutionary organization of oppressed people. We also supported the Young Lords, the anti-colonial struggle of the Puerto Rican liberation people and the American Indian Movement. The WWP defended the Mexicano/Chicano people’s right to have two/thirds of Mexico returned to them which was stolen by the U.S. in 1848. Defending the right of oppressed peoples to self-determination is key to weakening capitalist rule and strengthening class solidarity.

We have been key in fighting for the freedom of Mumia Abu-Jamal, Leonard Peltier, Lynne Stewart, the Cuban Five and other political prisoners. The prisons are nothing more than a system of concentration camps for the poor, which grew into the current New Jim Crow prison-industrial complex. Our slogan continues to be “Tear down the walls!” raised by the Prisoners Solidarity Committee in 1971 during the heroic Attica prison uprising.

Workers World Party, both in theory and in practice, has made important contributions to the liberation of women, on the job and through the movement for reproductive justice, and of lesbian, gay, bi, trans and queer people from all forms of patriarchal views and attitudes rooted in class society, beginning in the women’s liberation movement in the 1970s and following the heroic 1969 Stonewall Rebellion in New York where LGBTQ youth, led by transwomen of color, rebelled against police repression.

In the early 1970s we set up the Center for United Labor Action that fought for and won many battles for workers’ rights. CULA’s slogan was “If you don’t have a union, fight to get one. If you have one, fight to make it fight.” In the 1980s we organized “A Job is a Right!” campaign. All over Michigan we organized workers to demand that the auto plants not close down, but reopen under workers’ control. We organized the first national march against Reaganism in May 1981, and then a huge national gathering called the All People’s Congress in Detroit.

In Boston, the party helped to defend African-American children attending integrated schools from racist attacks. Black parents should have the right to choose where their children attend school, whether in local neighborhood schools or at integrated schools with children of other nationalities. We marched, organized and fought for this, building to a historic march in 1974. Party members also helped unionize the Boston school bus drivers into a fighting section of the United Steelworkers union.

The struggle to pull down capitalism and build a socialist society began more than a century ago. The early revolutions in which the workers and peasants threw out the ruling classes in order to build socialism took place in poorer countries that were immediately surrounded and attacked by the U.S. and other imperialists. Yet, amid incredible odds, these revolutions won amazing gains for the people. 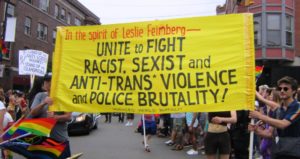 Where they have been overthrown, conditions for the masses have grown much worse and the impact is felt all over the world. The restoration of capitalism in the Soviet Union, the first workers’ state, has not only brutally hurt the workers there but has emboldened the bosses in their war on the workers here. It has also left post-colonial regimes in Africa and the Middle East vulnerable to outright attack. Workers World Party has always defended both national liberation struggles and countries trying to build socialism, while explaining that the pressures of imperialism and problems of underdevelopment can lead to setbacks and distortions.

We are internationalists to our core.

YAWF held the first demonstration in the U.S. against the Vietnam War in August 1962 which Ho Chi Minh personally thanked us for, and we were constantly in the streets, making it clear that Ho Chi Minh was right and Uncle Sam was wrong. The people of Vietnam had every right to fight to free their country, win self-determination and build socialism. Workers World Party has pushed to fill the streets against every rotten profiteering war, whether in Vietnam, Grenada, Serbia, Afghanistan, Iraq, or anywhere else. 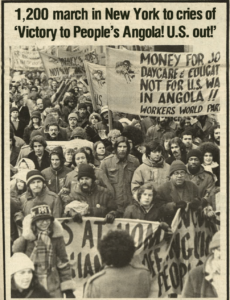 by Patrice Lumumba to the anti-colonial movements in Angola, Guinea-Bissau and Mozambique. WWP was instrumental in organizing the U.S. Out of Southern Africa Network in the mid-1980s which proudly chained shut the doors of Mobil Oil to protest its support for apartheid in South Africa.

We supported the International Action Center and numerous other anti-imperialist organizations. We’ve always demanded that the Pentagon budget be dismantled and the money spent on human needs, not wars.

Imperialist war is one of the greatest tools of oppression against the worldwide working class and the oppressed. In the U.S., it leads to repression of civil liberties, a growth in racism and right-wing bigotry, as well as endless profits for the rich.

Workers World Party does not leap on the bandwagon of criticizing militant and revolutionary organizations, or organizations of the oppressed, at a time when they are under attack by the capitalist state, its police apparatus or the corporate media. Instead we join in solidarity and against repression and support their right to resist. In the same way, on an international level we defend the leaders of oppressed countries when they are under attack through sanctions, bombing, occupation, media demonization and other forms of destabilization. 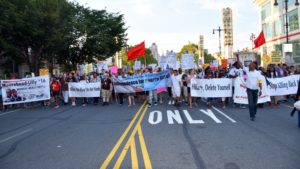 While building major mobilizations in 2012 such as May Day, against NATO in Chicago, and the Democratic National Convention and Republican National Convention, we defended a diversity of tactics, as we have since our founding. We are opposed to allowing anti- racist militant fighters, like the Tinley Park 5, to be isolated and attacked for the strategies they employ in class battles especially against neo-fascist forces. We want the broadest possible unity in our movement.

The struggle against the capitalist 1% is a global struggle. The workers in the U.S. have no “independent destiny.” Their fate is inevitably bound up with the 99% of the rest of humanity. The founders of Workers World Party called it a “global class war” back in 1959, and since then, this reality has only become more obvious with advances in technology like the Web and social media.

Our goal is to help build, expand, and unite the various progressive movements to a broader multinational, working class, global struggle. We envision a world without the 1%, and the racism, poverty, war and mass suffering it promotes and maintains.